skip to main | skip to sidebar

As always, it's a joy to be teaching at Joanne Andrighetti's studio in Vancouver.  It's the kickoff of a busy month for me, but since I adore teaching, I'm a pretty happy gal.

Next Wednesday I'm off to Moscow, home on the 11th, and then off to (Warm!!) and sunny California on the 20th.

Have a great weekend, everyone....I'm going to do my best to stay in touch.

Posted by Sherry Bellamy at 7:56 PM No comments:

Heading For Russia (!!) Next Month!

In other news: The recliner has arrived. I propose a metaphor regarding the recliner:

"A room filled with carefully selected, reasonably intelligent people (this would be my existing furniture...work with me here, okay??)  has been invaded by a stranger.(The recliner.) He's big and burly, doesn't really fit in...yet he's handsome in a kind of Russell Crowe/unshaved yet, incredibly sexy fashion. (Like in "3:10 To Yuma". Swoon.). You think that you could love him, or at least 'pretend to love him',  given time. A dirty job, but someone has to do it."

Needless to say, I'm going to have to change the carpets. I'm okay with that.

Posted by Sherry Bellamy at 6:39 PM No comments:

I have mixed feelings about this. I bought this magazine faithfully for at least 20 years, the writing was wonderful, the recipes dependable. Even when I lived in Frobisher Bay (as it was known when I lived there) on Baffin Island, I read Gourmet.

When Ruth Reichl took over as editor I was cautiously optimistic; I hoped that she'd update the magazine while keeping it's spirit intact. Instead she created a messy hodgepodge of a publication that I just couldn't warm up to, and I ceased regularly purchasing the magazine several years ago. (Except for the Christmas edition, always worth buying.)

I have dozens of copies of Gourmet from the 1940s to the 1960s, and I'll continue to treasure them.....but as for what Gourmet magazine has become, I can't say that I'll miss it. I feel for the staff, though; this must be dreadful for them.

Posted by Sherry Bellamy at 12:17 PM No comments:

Words I Never, Ever Thought I Would Write; or, I Bought a Recliner 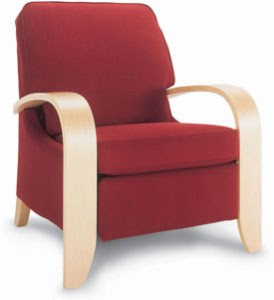 A bit of history; I have an abiding loathing for all things "recliner".  I just think that they're horrid in general, and if they're made of leather, well then they're actual demonic abominations.  No, seriously. Really not digging the recliner genre of furniture.

That's why I went out and purchased a leather recliner today, I guess. I'm a rebel against my own prejudices...a salmon swimming upstream straight to decorating hell. I'm a picky person when it comes to furniture, and I have a definite idea of what I want. (My style is eclectic; very personal and comfortable for both of us....our only ongoing issues have been my need to paint every single bit of visible wood a nice cream color...and my hatred of recliners. Other than that, we're cool.)

But here's the thing....my beloved has always wanted a recliner. He's pined for one; every year or so making a (plaintive, almost but not quite whiny) request. Somewhat bitchily, I've always denied him.  Not that I don't adore him, but I didn't like the idea of having to projectile vomit every time that I viewed my living room. (Although from a weight-loss perspective....hmmm. Oh, well, too late.)

So in the past week or so, I've looked at at least a hundred recliners. God, some of them are awful. But I did find one that was actually....okay. It's bit contemporary for the room, but the colors are good, and I can make it work. Most important though, David loves it; it's really comfortable, and that's the most important thing, especially for a guy who works so hard, for such a horrible, incompetently run,  soul-destroying corporation. (I'll say no more on that subject.)

The recliner that we ended up buying is the "Carlyle" from Lazy Boy. The picture above is the stock picture from the website....our chair will be buttercream leather, with very dark, almost black arms. It's ridiculously comfortable, and with a throw pillow or two, and/or a nice throw, it will look really good in the room, I think.  So we're both happy, and I think that I've lessened my karmic load a bit, hopefully. (Doesn't really look like a recliner, huh?)

Posted by Sherry Bellamy at 6:06 PM No comments: